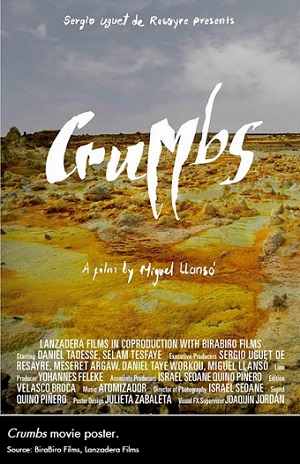 True, it’s also the first and only of its kind in existence. But that just adds something.

Set at an unspecified point in the future, the film introduces us to its world long after Earth’s population has begun to “decrease, wane and languish like the dying flame of a candle that barely resists extinguishing itself.” This depopulation isn’t the same existential threat portrayed in Children of Men, in which all women suddenly became infertile a number of years earlier; it’s more a result of, and resignation to, the ways our worst qualities overwhelm our better nature. Countless movies feature supervillains who justify their apocalyptic schemes by claiming that they’re actually saving the planet, not destroying it; perhaps CRUMBS takes place decades or even centuries after one of them finally succeeded.